Former Wales captain and Lions tourist Colin Charvis believes his countrymen will have a major to role to play for Britain and Ireland's elite in 2013. [more] 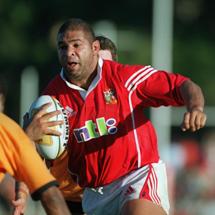 Former Wales captain and Lions tourist Colin Charvis believes his countrymen will have a major to role to play for Britain and Ireland’s elite in 2013.

Charvis won two Test caps the last time the Lions headed to Australia 11 years ago and he is predicting at least 10 Welshmen could follow his lead at the end of next season.

Wales were the only Home Nation to reach last year’s World Cup semi-finals and have started the 6 Nations with wins over Ireland and Scotland.

Youth has been at the forefront of their impressive recent form and Charvis believes the Welsh back row and backline could be a vital part of the Lions’ plans if they aim to beat the Wallabies with a combination of pace and power.

“I could see 10 or more Welsh guys travelling to Australia in 2013,” said Charvis.

“If whoever is in charge of the Lions wants to play a power game in the backs, then the Welsh players could be crucial.

“You can see the little partnerships developing, such as the back row of (Dan) Lydiate, (Sam) Warburton and (Toby) Faletau, the Lions front row (Gethin Jenkins, Matthew Rees and Adam Jones), and the balance in the back three of power and skill is perfect.”

Charvis, who has scored more Test tries than any other forward in the global game, believes Wales will finish the 6 Nations on a real high if they can beat England a week on Saturday.

Warren Gatland’s men travel to Twickenham in high spirits but England also arrive in Round 3 on the back of two wins from two tournament fixtures.

England might not have hit the heights of their title-winning campaign in 2011 but they are much improved in terms of discipline and composure from their ill-fated World Cup adventure.

But if Wales can weather the storm in south-west London then Charvis can see them marching their way through the home games with Italy and France to celebrate a third Grand Slam in eight seasons.

“The key for England is to stop Wales from getting up a head of steam,” added Charvis.

“The quicker they can get up off the line, the better. If you kick, don’t kick high; turn them and make them chase. I think England will rely on the boot to pin Wales back, because if Wales can get a sniff and you don’t keep them in their own half, as we saw against Ireland, they will come at you.

“With England, during the World Cup they would work hard to make 60 metres up the pitch, then keep on conceding penalties and losing all that ground. But against Italy their composure in the second half was much better, and they seemed far more organised and clinical.

“If Wales get a good win against England – which will not be pretty or easy – then all roads lead to the Millennium Stadium.

“There’s still enough potential drama for there to be an upset, such as England beating Wales or Ireland winning in Paris, but based on the first two games I think Wales are just going to get better.

“We all know that winning the Grand Slam is an extremely difficult feat as it’s a very tough competition. It’s only two out of five games so they’re by no means over the hill yet and it’s going to take a little bit more work but I believe, with the strength that they’ve got, they can go all the way.”