Rhino charge on with Lions

The British & Irish Lions have teamed up with Rhino for the 2013 tour to Australia. [more] 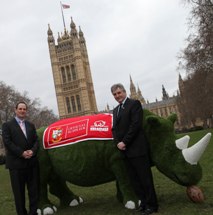 The British & Irish Lions have teamed up with Rhino for the 2013 tour to Australia.

Rhino, the world's leading supplier of contact and training equipment for rugby, has once again been appointed as an Official Supplier to the tourists for next year’s 125th anniversary trip to Australia. As they did for the 2009 tour, the Somerset-based company will supply training equipment at venues in the UK and Ireland, Hong Kong and Australia. They will also be providing the Official Training Ball and the commemorative ball collection for the tour.

A delighted Rhino CEO, Reg Clark, said of the new deal: “We’re thrilled to once more be a part of the Lions family for this tour and are pleased to note the continuity in terms of personnel and other sponsors. We’re very much looking forward to working with them all again. Heritage is a major part of Rhino’s brand and it is hard to find a rugby entity more imbued with this than The Lions.”

The 2013 Lions tour manager, Andy Irvine, was on hand to at the Attlee Room at the House of Commons, London, to announce the link-up at a reception hosted by the Liberal Democrat peer Lord Dholakia.

“The British & Irish Lions are delighted to welcome back Rhino Rugby as an Official Supplier for the 2013 Tour. The quality of their equipment is well known and was much appreciated by the 2009 Tour management and players. Rhino is well known for being a cutting edge developer of innovative new products and is additionally now an established performance ball manufacturer.”

About Rhino: The Rhino brand was established in the late seventies and has since established itself as part of the fabric of the game, not least of all through its Official Supplierships which include England Rugby, the Welsh Rugby Union, RaboDirect PRO12, the IRB 2010 Women’s Rugby World Cup, Bath Rugby, Cardiff Blues, London Wasps and St Helens Rugby League Club.

Under the stewardship of Reg Clark, who took over the company in 2006 together with Martin Johnson, the brand’s business interests have expanded to include: an extensive selection of rugby balls; Rhino-Turf, a range of artificial surfaces; RhinoGB, the brand’s fashion line; Rhino Teamwear, the team wear franchise. Over the past few years Clark and the company have won a range of awards, including Rugby Business Person of the Year in 2008/9 and in 2011 the Innovation in Rugby Award at Rugby Expo for Rhino’s latest product, the Collision King.