The New Year may already be nearly two months old but it's only just beginning for the Lions' next opponents. [more] 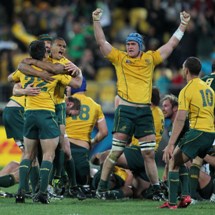 The New Year may already be nearly two months old but it’s only just beginning for the Lions’ next opponents.

The Wallabies take on Britain and Ireland’s elite in 2013 as they look to repeat their 2001 series success against the Red Army and the build up to that challenge kicks off in earnest this week when the Brumbies, Force, Reds and Waratahs start their Super 15 campaigns (the Rebels have a bye in the opening round).

The national XV head into 2012 with mixed emotions after a first Tri Nations crown in a decade was followed by a disappointing semi-final exit at the World Cup but the future looks bright for Australian Rugby.

With the core of their side now being made up of youngsters who already possess plenty of big game experience and with head coach Robbie Deans having recently committed his future to the cause until after the Lions leave town, it’s hard not to picture the Wallabies getting better and better over the next 15 months.

“There were ups and downs, high points and low points in 2011 but I’m happy with the year we had,” said Wallaby and Reds skipper James Horwill, who is hoping to lead his club to back-to-back Super crowns this season while guiding his country to the No1 spot in the world rankings.

“The Tri Nations was a big step for us, especially in terms of the consistency of our performances. We worked our way to winning games that we previously probably wouldn’t have got a result out of.

“On the other side of that, there were still games that we did let slip where we should have got a better result. We need to develop that over the next 12 months to become the No1 team in the world.

“That’s our goal: by the end of 2012 we want to be the No1 Test-playing nation in the world. To do that, we’ve got to improve in some areas.”

Horwill admits that a shock defeat to Ireland in the pool stages of the World Cup and the subsequent knockout blow delivered by the All Blacks in the final four was hard to take but he insists it won’t hold the Wallabies back as they look ahead to the Lions.

As the old adage goes, ‘What doesn’t kill you makes you stronger’ and Horwill is convinced that will be the case for a side who produced some scintillating rugby throughout 2011.

“I don’t think the pain of the World Cup subsides – you just have to move on and understand that it can be one of the things that drives you to keep improving,” added Horwill.

“The future looks good. We’re doing well in Australia in making sure that we hold on to as much of that young talent as we can. As a group we have a fairly young age and the best rugby for a lot of the guys is ahead of them.

“Everyone in our team understands that this group is on the verge of something that could be very special. That last little step to get to where we want to be is probably going to be the hardest one to take, though.

“We want to become the best team in the world and we’re currently ranked number two behind a very good New Zealand side.”

To knock the All Blacks off their perch at the top of the tree, the Wallabies know consistency will be absolutely critical.

Horwill and co have shown they can beat the best but they know they have to demonstrate the mental strength and focus to win week in, week out, whoever the opposition.

Tri Nations victories over South Africa and New Zealand and successive end-of-year wins over Wales are just a few of the indicators of how talented this latest crop of Aussies really are, but a mid-year reverse at home to Samoa and the poor showing against the Irish in Auckland are reminders of the work still to be done.

There’s no doubting that the class of 2011 and 2012 are already far more consistent than they were when Deans took over in 2008, however, and star scrum-half Will Genia is convinced things are moving in the right direction.

“The progress we’ve made is in terms of consistency in our performance. We’ve still got a little bit to go, though, to push to be the No1 team in the world, which is what we’re striving for.

“We’re working on winning games from situations where, in the past, we’ve let them slip away because we didn’t have the mental capacity to stay in them.

“The experience of winning big games definitely does help. The big thing for us is having that poise in big matches and in big moments in those big games. You only ever get them if you’re lucky enough to be in those situations.

“We were good enough to win the Tri Nations last year and we’re going to have produce as good an effort, if not better, to be in the running again this year.

“The other side of that progress is in developing youth and the talent coming through that’s going to have to take the next step up to Test level.

“The end-of-year tour proved that we’ve got strength in depth. We had a lot of front-line players out and that gave guys who might not have got an opportunity a chance. They took that with both hands in both fixtures and it shows what an opportunity can do for players.

“We’re developing young guys to come through and that keeps everyone on their toes.”