Stuart Lancaster will know whether he will become England coach on a full-time basis by the end of the 6 Nations. [more] 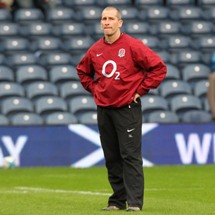 Stuart Lancaster will know whether he will become England coach on a full-time basis by the end of the 6 Nations.

New RFU chief executive Ian Ritchie confirmed at a press conference at Twickenham today that England’s interim coach will be interviewed for the permanent position before the end of the championship.

England have two games to play before the end of the campaign and have won two of their three games under Lancaster – away to Scotland and Italy. Next up are France in Paris and Ireland at home on March 17.

Ritchie has made it clear he will take a lead role in the appointment of the new head coach and says he wants to announce Martin Johnson’s successor within the next three weeks.

He will take advice from a panel of experts that includes two former England captains in Richard Hill and Rob Andrew as well as Lions legend Sir Ian McGeechan and Conor O'Shea.

Lancaster has already confirmed he has applied for the job on a permanent basis and is likely to face opposition from former South Africa and Italy coach Nick Mallett, ex-Ireland boss Eddie O'Sullivan and 2011 Japanese World Cup coach John Kirwan.

''We are going to see Stuart while the 6 Nations is under way. Stuart knows that and we have tried to do it at a time that is most convenient to him,” explained Ritchie.

''I appreciate it puts more pressure on him because he has the day job to be getting on with. It is helpful to be able to do that so we can move the process on.

''Timetable-wise I would hope, believe, we should be in a situation to make an appointment by the end, towards the end, of the 6 Nations.''

Lancaster, who led the Saxons set up prior to being handed the senior reigns after Johnsons’ resignation, has won plenty of plaudits for his efforts on and off the field since taking charge in December.

The former Leeds coach has regularly talked of restoring pride in the England jersey and ensuring the first XV reconnect with the grassroots majority.

Critics of these intentions have been few and far between among both the general public and in the media, with Ritchie having also been impressed with what he’s seen so far from England’s current coach.

"I think Stuart has done a fantastic job," said Ritchie.

"I think he's clearly entered a very difficult position, he's done a lot of things that you could point to that we would all agree are the right things to have done.

"If you talk to him, and I've managed to spend some time with him, he is an impressive person.

"Selection, however, is all about comparisons. What we need to look at with regard to Stuart is how does Stuart stack up against the other candidates?

"It's always a good situation if you've got strong internal candidates as well as external candidates. But it's comparative, how does he compare with the other people on the list?

"These are all things we are going to have go through with the people we interview."