Tommy Bowe raced away for two tries as Ireland came up with their best result against the French in Paris since 2000 as they drew 17-17. [more] 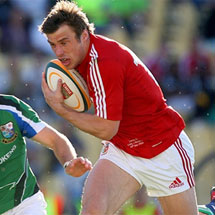 Tommy Bowe raced away for two tries as Ireland came up with their best result against the French in Paris since 2000 as they drew 17-17.

The Irish won the first-half 17-6 to find themselves with their noses in front for the first time at Stade de France, but the French revival came after the break as they notched 11 points without reply.

Bowe’s first-half double – the first an interception try and the second a chip and chase from 40 metres out – took his Irish test try tally up to 24 and put Ireland in a great position to make it two wins on the bounce, but France increased their intensity in the second half.

“We had an outstanding first half and we put them under so much pressure. But not to score any points in the second half is disappointing and it is a quiet dressing room at the moment,” admitted Bowe after the game.

“To score two tries in Paris is very difficult, but now we need to dust ourselves off and come up with two big results to end with.”

Those two Bowe tries were converted by Sexton and the Leinster outside half also added a penalty in the first-half. Morgan Parra landed two penalties for the French and then kicked two more in the second half.

Centre Wesley Fofana burst clear for the crucial French score to make it three tries in as many games since making his debut against Italy at the start of the 2012 RBS 6 Nations championship. That enabled him to become the first player since French scrum half Jerome Gallion in 1978 to score in each of his first three championship matches.

Ireland had a period of intense pressure for 10 minutes that should have earned them some points, but the game ended with France launching one final attack to try to rescue the result.

“That is a disappointing result for us. We had a great opportunity to win and we didn’t take it,” confessed Irish skipper Paul O’Connell.

“Our defence was excellent and we wanted a better start than we had made in our last two games. When we retained the ball we were very good.

“It was frustrating because you don’t get many chances to win in Paris. With the scoreline as it was at half-time we have got to be disappointed with the end result.”