Max Evans has finally been cleared of an assault charge less a week before Scotland face Ireland in Dublin. [more] 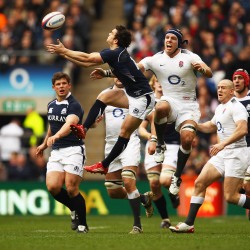 Max Evans has finally been cleared of an assault charge less a week before Scotland face Ireland in Dublin.

Evans was alleged to have glassed Alasdair McCaig with a champagne flute after he had visited the VIP lounge of the Lulu club with then Glasgow Warriors team-mates Graeme Morrison and John Barclay.

The 28-year-old always denied the allegations, insisting that he had acted in self defence after the alleged victim had landed the first blow and that he had forgotten he was holding the glass.

“Obviously I am very pleased, and I appreciate the jury’s verdict,” said Evans.

“It's been a challenging time for me and my family and friends, and I would like to thank everyone who has been supportive over the recent weeks and months.

“I will now put this behind me and be very focused on my rugby. It's great to be back in the Scotland camp with the players, coaches and management.”

With the five-day trial and an ankle problem now behind him, Evans is in full training with Scotland and is expected to be named in the matchday 22 for Saturday’s Aviva Stadium encounter with the Irish.

Evans, who plys his trade with French outfit Castres, started the opening 6 Nations games against England and Wales on the left wing but missed the defeat to France after damaging his ankle in Cardiff.