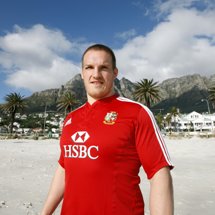 Jenkins, who was a Test Lion in both 2005 and 2009 and remains in contention to complete a hat-trick of tours in 2013, admits that semi-final defeat to France last autumn was hard to take.

Wales were the surprise package of the global gathering in New Zealand as they reached the final four for the first time in 24 years.

But their hopes of capping a fine tournament came crashing down in the cruelest of circumstances after they lost out to France in Auckland.

The sending off of skipper Sam Warburton with less than 20 minutes played was followed a heroic effort from 14 man Wales, with fellow Lion Leigh Halfpenny sending a late, long-distance penalty just inches short of the crossbar.

The manner of the loss and the thoughts of what might have been could easily have seen Warren Gatland’s men take their eye of the ball in this year’s 6 Nations but Jenkins insists it has already proved an extra motivating factor.

"The disappointment of losing to France in that semi-final has spurred us on, to work hard and get back to that level," said Jenkins, who missed the opening round win in Ireland but started the wins over Scotland and England.

“We’ve built towards this 6 Nations and really worked on things that would get us victories. Three wins from three, you can’t ask for any more.

“England was one of the toughest Test matches I have ever played in and I’ve played in a few.

“It was constant for 80 minutes, there were no down periods and when we were down to 14, we had to work so hard to keep the ball.

“The mentality is that as long as we are in touching distance, we have players who can turn the game. There is a lot of belief in the camp and that comes from the work we do and the energy the youngsters bring through.

“I was a bit of a strange feeling at Twickenham when we got the Triple Crown. Normally when you win something, it’s all over afterwards but we’ve still got big games to come.”

The first of those big games comes against Italy at the Millennium Stadium this Saturday, before a potential Grand Slam decider against France at the same venue a week later.

And while the words ‘Grand Slam’ appeared to have been banned from the Welsh camp during the tournament, Jenkins admits there is no escaping the expectations now.

“You can’t avoid the talk of the Grand Slam as the public are all talking about it,” added Jenkins.

“When we were in New Zealand we were in a bit of a bubble so we didn’t see too much of what was going on back home. But now we are in Wales, we know there is going to be a lot of expectation.

“The main thing the younger players are going to find is that, over the next week or two, the pressure and expectation is going to rise. When you are younger, it hits you a little bit more because you have never experienced anything like it before.

“The crowd are going to be very expectant and we have to deal with that mentally and emotionally.

“As a player you just look forward to the next game and Italy is a big challenge for us. They are always tough, and they are the only thing we are concentrating on."