Wales have finally been able to name their all-Lions front row for the 6 Nations clash with Italy this weekend. [more] 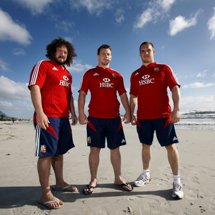 Wales have finally been able to name their all-Lions front row for the 6 Nations clash with Italy this weekend.

The return of former captain Matthew Rees sees the Scarlets hooker pack down alongside fellow Lions Gethin Jenkins and Adam Jones, just as he did when Britain and Ireland’s elite took on the Springboks in the summer of 2009.

The trio first appeared together in Lions colours in the second half of the first Test in Durban, before starting the second rubber in Pretoria a week later.

They returned from South Africa with their individual and collective reputations enhanced but injuries have since prevented them from pushing on as a unit.

Wales coach Warren Gatland has only been able to pick Jones, Rees and Jenkins together on three occasions in the 35 games that have followed the latest Lions tour and he’s understandably delighted to have all three available for the fourth installment of their push for a Grand Slam.

"Due to injuries to all three players at one time or another we have not been able to field this 2009 Lions front row too often," said Gatland, who has moved the inexperienced Ken Owens to the bench and dropped Richard Hibbard from the matchday 22 to provide room for Rees.

"The unfortunate things is that, as a group, they can’t keep their bodies fit, whether it’s Gethin, Adam or Matthew.

"This now puts Matthew in contention for selection against France. He’s having to fight for his place as hooker is one area where I feel there’s a lot of depth in the squad at the moment.

"So, although we are more than happy with the job Ken has done for us, we are giving Matthew the opportunity to make his contribution as the competition reaches its climax."

While there was good news for Wales in the front row, there was bad news in the back row as skipper Sam Warburton was ruled out through injury.

The inspirational openside is struggling with a knee problem he picked up in the win over England, with Ospreys youngster Justin Tipuric taking over in the No7 shirt.

Jenkins is therefore handed the captain’s armband in Warburton’s absence despite the fact that Rees led Wales in last year’s 6 Nations before a neck injury stopped him from travelling to the World Cup.

Jamie Roberts, the HSBC Player of the Tour for the 2009 Lions, has recovered from a knee injury that had been appeared likely to leave his participation in doubt for the remainder of the tournament.

His recovery means Scott Williams, the try-scoring hero of the Triple Crown triumph at Twickenham, has to settle for a place on the bench.

Luke Charteris is also named among the replacements after making his comeback from a wrist injury with the Dragons last weekend. The giant second row was one of the standout performers in the recent World Cup but hasn’t played international rugby since the Bronze Medal defeat to Australia in Auckland.

James Hook has fully recovered from the bout of chicken pox that stopped him featuring against England so he returns to the bench in place of fellow 2009 Lion Stephen Jones.