Gethin aims to break his duck

Double Lions tourist Gethin Jenkins will be more motivated than ever when he leads Wales out against Italy on Saturday afternoon. [more] 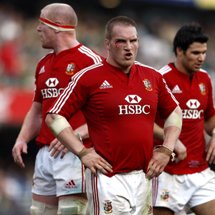 Double Lions tourist Gethin Jenkins will be more motivated than ever when he leads Wales out against Italy on Saturday afternoon.

The world-class loose head will be captaining Wales for the fourth time in his illustrious career, but he has yet to taste success as an international skipper.

Fortunately for Grand Slam chasing Wales, the 31-year-old, who has won 85 caps for his country and takes over the armband from the injured Sam Warburton, doesn’t intend to slip up for a fourth time.

“The first thing I thought of when Gats (Wales coach Warren Gatland) asked me to be captain was that I have to break my record of three games and three defeats. But we are a very confident squad and we are looking forward to Saturday,” said Jenkins.

“We could easily have lost one or two of the games so far, but we dug in and won them. That makes training more enjoyable and we want to build on that momentum.

“The expectation is all on us on Saturday, just as it was against Scotland at home. Italy will bring their strengths to the game, and we have worked on them early in the week, but it is all down to us imposing our game on them.”

Jenkins first led Wales in the Prince William Cup clash with South Africa in November 2007, a game the Dragons lost 34-12.

The 2005 and 2009 Test Lion was also captain against Australia at the Millennium Stadium two years later as Wales were beaten 33-12 and again in the 21-18 reverse to the Wallabies in the 2011 Bronze Final at the recent Rugby World Cup.

But despite Jenkins’ poor record in terms of results, the decision to name him as stand-in skipper was an easy one as far as Gatland was concerned.

The New Zealander was quick to highlight the Blues prop’s all-round intelligence and experience when singling him out as the right man for the job, although he admits Jenkins won’t be short of support from elsewhere in the side.

“Gethin has taken over during games and it will take a little bit of pressure off Matthew not being captain and having other leaders around him,” said Gatland.

“Matthew hasn’t played for a while so we didn’t want to give him back the captaincy. There are a lot of things going on for a hooker so we thought we would let him concentrate on those.

“Gethin has really stepped up this week, has been encouraging the players and has had a rare smile on his face.

“He has a different leadership style to Sam. He leads from the front and is one of the most intelligent front row forwards I have worked with.

“There are some strong leaders and characters in this team. We have good experience at half-back, where Rhys Priestland calls a lot of the shots; Jamie Roberts and Dan Lydiate have stepped up in leading the defence and Leigh Halfpenny is one of the best professionals we have at the moment.

“Being captain of this team isn’t the hardest job in the world because there are so many players capable of taking responsibility.”