Lions captain Paul O'Connell is confident he will be back in action for the Heineken Cup quarter-finals. [more] 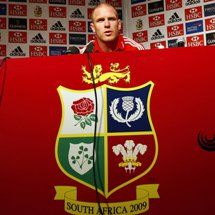 Lions captain Paul O’Connell is confident he will be back in action for the Heineken Cup quarter-finals.

The giant second row damaged knee ligaments in Ireland’s 6 Nations draw with France last weekend and is expected to be sidelined for between a month and a month-and-a-half.

O’Connell, who led the Lions in South Africa three years ago, will therefore miss the international clashes with Scotland and England but he remains hopeful of featuring in Munster’s European clash with Ulster on April 8.

“The prognosis is four to six weeks with the Ulster match in the Heineken Cup falling in the middle of that but I would be very hopeful to be back in time for that game,” said O’Connell.

“I remember exactly when it happened in the match. I hobbled around for a bit but the adrenaline kicked in and I was able to play on without too much discomfort. At soon as the match finished though I knew I was in a bit of trouble.

“When you damage the medial ligaments in your knee you have to wear a brace that helps not so much to immobilise the joint but to restrict the movement.

“I started my rehab on Wednesday evening with the Munster physio Dave O’Sullivan and earlier that day I was back in the gym doing upper body weights.”

O’Connell admits the timing of the injury was particularly disappointing coming as it did in the middle of a 6 Nations campaign in which he was captaining his country in the absence of fellow Lion Brian O’Driscoll.

Throw in the fact that O’Connell was rediscovering the kind of form that made him a certainty for a Lions Test spot in 2009 and it becomes easy to understand how frustrated the 32-year-old is feeling.

“Frustrating would be one word for it. Injuries are part and parcel of sport but any philosophical attitude tends to disappear, initially at least, when it happens to you,” added O’Connell.

“I thought I was in good form and had been really enjoying the Ireland camp; it was good fun and there was good camaraderie. We were building nicely in terms of performance in the 6 Nations and to go from that to my current situation is disappointing.

“I spent some time in camp but came away because I needed to let the lads get on with it. They need time to concentrate on the tasks in hand and don’t need me there. I had offered my views on various things but it was time to let them get on with it.”