Owen Farrell has hung onto the number 10 jersey in an unchanged England side to face France on Sunday. [more] 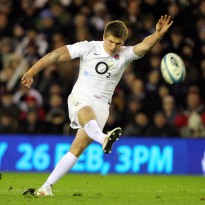 Owen Farrell has hung onto the number 10 jersey in an unchanged England side to face France on Sunday.

The Saracens pivot was moved to fly-half after club-mate Charlie Hodgson, who started against Italy and Scotland, suffered a finger injury.

Hodgson has returned to fitness for the vital Six Nations clash but has been confined to the bench with Farrell continues to pull the strings at 10.

"It was a forced change going into the Wales game but it was a chance to seen Owen, Brad and Manu together and I felt they delivered," said Lancaster.

"They played well and there was no reason to change it really.

"Lee Dickson also deserves to keep his spot for the tempo he brings.

"The back three got themselves into the game more and we think they will play a big part at the weekend, with France giving us plenty of ball in terms of kicking."