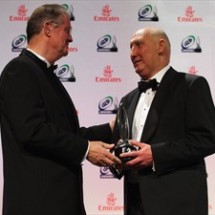 Both players featured against the British & Irish Lions during their illustrious careers, with Canterbury back row man Hobbs enjoying an unblemished record of five games against the 1983 tourists. White died in Gisborne on March 10 and Hobbs passed away on March 13.

Hobbs scored a try in the fourth and final Test to help his side complete a clean sweep with a 38-6 win in Auckland and he also helped Canterbury notch a famous 22-20 triumph over Ciaran Fitzgerald’s men.

Hobbs played 21 times for his country – four as captain – between 1983 and 1986, scoring four tries. He later became Chairman of the New Zealand Rugby Union and, in that role, he played a major role in securing the hosting rights for last year’s Rugby World Cup.

Hobbs was present at the Rugby World Cup Final in Eden Park to witness Richie McCaw lifting the Webb Ellis Cup and, the following day, he won the prestigious Vernon Pugh Award for Distinguished Service at the 2011 IRB Awards ceremony in Auckland.

“Among numerous highlights, he provided the vision, passion and leadership that secured New Zealand the right to host RWC 2011 and as Chairman of RNZ 2011 those qualities laid the foundations for a hugely successful tournament of which New Zealanders and the global Rugby family can be proud.”

Richard ‘Tiny’ White played 55 games, including 23 Tests, for the All Blacks and more than 100 games for Poverty Bay during an outstanding career as a second row forward. He helped the All Blacks beat the 1950 Lions 3-0 with one game drawn and also played against the tourists in a provincial game.

He made 23 consecutive Test appearances for the All Blacks during his international career before devoting his time to sheep farming. He became Mayor of Gisborne in 1977.