Dean Richards has been confirmed as the new boss of Newcastle for the start of next season. [more] 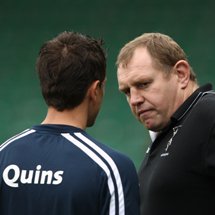 Dean Richards has been confirmed as the new boss of Newcastle for the start of next season.

The 1989 and 1993 Lions No8 is currently serving a three-year suspension as a result of the Bloodgate scandal but will take over at Kingston Park in August.

Richards was banned from the sport in 2009 after admitting encouraging wing Tom Williams to fake a blood injury in Harlequins’ Heineken Cup quarter-final defeat to Leinster that April.

But with his suspension now only having five months to run, Richards has been announced as Gary Gold’s successor in the North East.

“Dean needs no introduction in the world of rugby, and it will be a true honour to have him at Newcastle Falcons next season,” said Newcastle owner Semore Kurdi.

“It is not often that you get a chance to work with two people as talented and accomplished as Mr Dean Richards and Mr Gary Gold.”

Gold took over from 1997 Lion Alan Tait earlier this season but his appointment was only ever going to be a short-term one as Newcastle attempt to move off the bottom of the Aviva Premiership table and avoid relegation.

That task remains a tall order, however, with the Falcons currently eight points adrift of 11th-placed London Wasps with just five games remaining.

But Richards will be heading to Newcastle regardless of whether they stay in the top flight after turning down approaches from other outfits in order to join the 1998 Premiership Champions.

“I am delighted to get the opportunity to join Newcastle Falcons,” said Richards, who led Leicester to back-to-back Heineken Cup titles in 2001 and 2002 and has also coached in France with Grenoble.

“Whilst there was interest from other clubs, there are two reasons why I chose the Falcons – the supporters and Semore Kurdi’s ambition for the club.

“The Falcons fans are very enthusiastic about their rugby and they are fantastic people with a great sense of humour who you can enjoy a laugh with.

“I met up with Semore and his vision made my mind up.”