Ireland are expecting England to provide threats all over the pitch when the two teams meet at Twickenham tomorrow. [more] 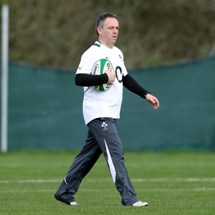 Ireland are expecting England to provide threats all over the pitch when the two teams meet at Twickenham tomorrow.

But Tainton knows that the real battle will come up front as Ireland search for an eighth win in nine meetings with the English and a fourth in their last five trips to London.

"Owen Farrell has done extremely well at fly-half for a young lad.

"There's obviously added pressure on him with his father (Andy) being one of the coaches, but he's handled it easily.

"The power and pace of Manu Tuilagi is also a major threat, but you can never get too far away from the England pack.

"They always produce a good eight and have a very strong tight five, so we'll have to match that."

While Ireland head into the final round with an unchanged XV from the side that trounced Scotland 32-14, England make one alteration from the team that won in Paris last time out.

Saracens wing David Strettle comes in for Charlie Sharples after recovering from a sternum injury in a move that Tainton believes make England a better side than the one that shocked the French.

"David Strettle coming back in makes them stronger. He played in the first three games of the championship," added Tainton.

"One thing he's got is out and out pace. Since he's moved to Saracens he's really blossomed and will be a big threat.

"He was very unlucky not to be given the try against Wales that would possibly have earned England a draw.

"He's dangerous and goes looking for the ball, as does Chris Ashton, so we'll have to make sure we're solid around the breakdown."