Wallaby not walking away yet

Wallaby veteran Dan Vickerman hasn't given up hope of facing the Lions. [more] 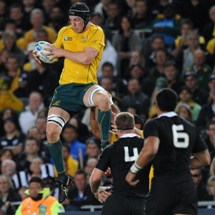 Wallaby veteran Dan Vickerman hasn’t given up hope of facing the Lions.

Britain and Ireland’s elite head Down Under in the summer of 2013 and Vickerman insists he’s not yet ready to retire from the Test scene.

The 32-year-old was a member of the recent Rugby World Cup squad after returning home from a spell studying in England but is currently sidelined with a shin injury.

Question marks have been raised about the second row’s ability to fully recover from an operation to remove a metal rod but the former Cambridge University captain says he’s determined to get back to his best sooner rather than later.

''I'm still training, I want to play rugby and as long as I can do that I'll keep going,'' said Vickerman, who had the rod inserted into his tibia in 2010 in an effort to relieve stress on the bone following a fracture.

''I've just got to see if I can get over this operation and get back on the field. I want to play with the Waratahs and get selected and do my best there.

''There's still a lot of stuff I want to achieve in my football career – I'm not going to cut it short quite yet.''

Vickerman hasn’t set a definite date for his return but he’s hopeful he could be back running in around a month.

''I think once I'm over the operation I'll go through the rehab process and see where we go from there,'' added Vickerman.

''I'd like to say once I get over the surgery I'll probably start running in a few weeks' time and see if that works for me and then go from there.