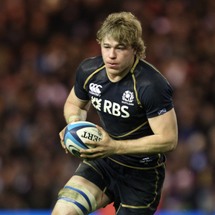 David Denton hopes another strong individual display can inspire Scotland to victory over Italy this afternoon.

The South-African schooled star has been in outstanding form in his first 6 Nations but today he goes head-to-head with arguably the best No8 in world rugby.

Italian skipper Sergio Parisse is so often his country’s best performer on the big stage and Denton knows that winning his personal battle at the Stadio Olympico will go a long way to securing Scotland a first victory in seven games.

"I think it's about getting it right this weekend against their talisman," said Denton.

"I've got an opportunity to make a big difference. If you can get on top of Parisse it might get them down a bit.

"It's important for me to win that personal battle for the team to do well. I've never played against him before and I'm really looking forward to it. He's one of the great No8s in the world, but so are Jamie Heaslip, and Imanol Harinordoquy who we've played in the last few weeks.

"It's been a great opportunity for me to learn and test myself up against the best and I think I've gone well so far."

Denton may have gone well but it’s fair to say that Scotland haven’t.

Their performances have deserved more than four straight 6 Nations losses but last week’s comprehensive 32-14 reverse in Dublin was undoubtedly their worst display of the campaign.

The 22-year-old admits the Aviva Stadium showing was a bitter blow for Andy Robinson’s men but he insists confidence remains high as they search for a first win in the Italian capital in six years.

"There was a lot of disappointment in camp after the Ireland game, particularly that night. But there was a real quick turnaround so there wasn't time to dwell on it. We needed to start concentrating on the task at hand," added Denton.

"It was the first game we had really under performed in the 6 Nations. We've been playing some great rugby and it's about getting back to that this week. We're disappointed with where we are. We're a proud bunch of guys and that's not where we wanted to be.

"It's a really important occasion. We're capable of putting in a really good game against Italy and getting a good win. If we get the scrum right and play some clever rugby we'll do that.

"We haven't won a lot of games recently, but we've been playing good rugby and we're confident in our ability. We've got some great leaders in the squad from the senior group and it's combined with the confidence of youth. There are a few young guys coming through and we know what we're capable of as individuals and as a team."