Dan Lydiate has been named 2012 RBS Player of the Tournament - to join a host of Lions greats. [more] 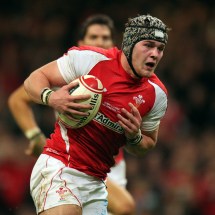 Dan Lydiate has been named 2012 RBS Player of the Tournament – to join a host of Lions greats.

The fearless Wales flanker picked up man-of-the-match awards against Scotland and France as the Dragons claimed a third Six Nations Grand Slam in eight seasons.

Lydiate received 20 per cent of more than 30,000 fans votes, which were collated following Wales' Championship clean-sweep.

"I am really surprised to be honest although I am genuinely chuffed to bits," said Lydiate.

"It tops off an amazing competition for me and for Wales. To be part of such a talented Wales team and win the Grand Slam in Cardiff on Saturday was incredible in itself but to then be voted Player of the Championship is absolutely unbelievable.

"It is a massive honour to win, especially given the quality of the other players up for the award. Thanks to everyone who voted for me, it means a lot."

Since 2005 the prestigious accolade has been picked up six times by Lions tourists, with Brian O'Driscoll claiming a hat-trick of awards.

Lydiate's former Welsh team-mates, and Lions, Shane and Martyn Williams are also previous title holders and the Newport Gwent Dragons will hope to follow in their foot-steps by touring with the famous side next year.

Warburton, also a contender for the Lions tour of Australia, paid tribute to Lydiate.

"Dan in the French game was absolutely phenomenal," said Warburton.

"He has had games like that in the past but has never had the recognition for it. His tackle count and work in defence is always the best when you look at the stats after a game.

"I've never seen anybody in so much pain after a game. Afterwards his body is in a mess. He doesn't feel pain during a game – he has the heart of a lion."