Lydiate not looking to leave

One of the most in demand stars of the British and Irish game insists he won't be affected by rumours of a big money move away from his current club. [more] 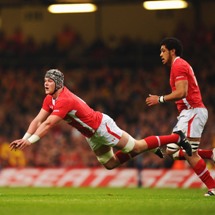 One of the most in demand stars of the British and Irish game insists he won’t be affected by rumours of a big money move away from his current club.

The hard tackling blindside picked up the player of the tournament award for a series of sensational showings as Wales won a third Grand Slam in eight seasons.

Lydiate’s starring role in his country’s European triumph has seen him become a front runner for the Lions tour to Australia in the summer of 2013 and a host of big name clubs are now hoping the 24-year-old will be pushing for the ultimate selection honour away from Rodney Parade.

But Lydiate says he isn’t worried about being linked to top English, French and even other Welsh outfits and is instead fully focused on seeing out the remaining season and a quarter of his Dragons contract.

"I have another season on my contract and just look forward to the next training session and the next game," Lydiate told the South Wales Argus.

"But I am looking forward to getting back with the Dragons – they gave me my chance when I was younger and I can’t thank them enough.

"The fans have always been awesome and get right behind me while there’s a real team spirit in the squad."

A number of big-name Welsh internationals have recently announced moves to France, with triple Lions tourist Gethin Jenkins among those joining Mike Phillips, Lee Byrne and James Hook in the Top 14 next term.

Lydiate’s regional team-mates and fellow Welsh caps Luke Charteris and Aled Brew are also heading across the Channel this summer but the English-born back rower has hinted that he intends to stay in Wales if he does decide to say goodbye to the Dragons for the start of the 2013/14 campaign.

And even if he does decide to play his rugby away from Newport in the future, you can be assured that Lydiate will simply be keeping his head down and working hard for club and country in the mean time.

"I didn’t expect to be named player of the 6 Nations. It’s such an honour and it’s been an awesome campaign," added Lydiate.

"I’ve started to get a bit of praise and it’s nice to get a pat on the back but I just like to keep my head down.

"I want to stay in Wales but to be honest I am not looking too far ahead, I never have done.

"It’s a shame to see Luke Charteris, Aled Brew, Martyn Thomas and Jason Tovey leaving but hopefully we can recruit some good guys and have a lot better season next year."