Ex England skipper Lewis Moody believes the future looks bright for British and Irish rugby ahead of the 2013 Lions tour to Australia. [more] 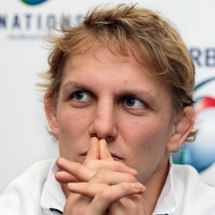 Ex England skipper Lewis Moody believes the future looks bright for British and Irish rugby ahead of the 2013 Lions tour to Australia.

Moody, who was a Test Lion and a try scorer against the All Blacks back in 2005, says the number of young players coming through the ranks, particularly in England and Wales, is a major boost for the game in this part of the world.

The former Leicester and Bath great is convinced that youth should be no barrier against success, as was shown by the manner in which Wales and England shared the top two spots in this season’s 6 Nations.

"The most exciting aspect of the 2012 6 Nations was the emergence of so much new talent," was Moody’s optimistic assessment of the tournament in his column for The Independent.

"So much for all those voices of doom warning us that with all the overseas players flooding our Leagues the next generation would find it impossible to materialise.

"Wales have ridden the wave of youth all the way to Grand Slam glory. And to a certain extent England are in their slipstream.

And it’s not just on the international scene where Moody can see the youngsters quickly becoming stars.

Having recently been forced to retire through injury, Moody has had more time to keep a watchful eye on the next generation of talent coming through the English club scene in particular and he’s been impressed with what he’s witnessed.

And it’s not just England who look set to prosper from the emergence of young talent. With the Lions having a long history of picking players who are often outside the radar a year before a tour heads south, there could be a few youngsters just making their mark who go on to play starring roles against the Wallabies in 14 months’ time.

"I can assure you that the England players will have returned to their clubs this week and rapidly reached the decision that the intensity does not stop. In the months they've been away, players have stepped up into the void and been very impressive," added Moody.

"Some of these internationals may well be very young but already they are being pushed by the new crop coming through. It really is an exhilarating scenario.

"Take Farrell, to many people's minds the "find" of the tournament. Owen is only 20, a mere pup. But George Ford has just turned 19. And while Owen has been performing his heroics wearing the Red Rose, Ford has been turning heads at Leicester. George was picked ahead of Toby Flood last Sunday and justified Richard Cockerill's brave selection with a fine display in the LV Cup Final win over Northampton.

"And there's the point. Having seen the young success stories, coaches are becoming increasingly prepared to throw the teenagers and early 20-somethings into the fray. They are so well conditioned in the academies, some of them are ready for the big time straight away. Granted, they must be protected against the perils of burnout, but there is absolutely no point in wrapping them in cotton wool. Good enough, old enough – that seems to apply more now than ever.

"These kids are energising the scene. Farrell has Ford snapping at his heels, while the older guard such as Floody will rise to the challenge. The bar is continually being raised and the England national side will be the ultimate beneficiary. It's all about competition for places."