The Reds ruined what could have been a near perfect weekend for Australian Rugby by being hammered by the Bulls in Pretoria. [more] 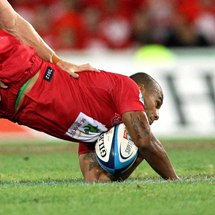 The Reds ruined what could have been a near perfect weekend for Australian Rugby by being hammered by the Bulls in Pretoria.

The reigning Super XV champions were thrashed 61-8 at Loftus Versfeld – the venue of the Lions’ heartbreaking second Test defeat to the Springboks three years ago.

The Queensland-based franchise had enjoyed an unbeaten start to the season prior to their tour of South Africa but have now lost back-to-back games after they failed to bounce back from a Round 4 reverse to the Sharks.

Their dismal showing was the only blight on an otherwise impressive weekend of rugby for the five Australian franchises, all of whom will face Britain and Ireland’s elite in 2013.

Jake White's Brumbies produced the result of the round by ending the 100-per-cent record of James Haskell’s Highlanders in Canberra.

White’s decision not to accept an invitation to apply for the job of England head coach appears to be paying off as the Brumbies are now top of the Australian conference with three wins from their four outings so far this term.

The Waratahs also took a big scalp earlier today as they saw off the Sharks in Sydney.

A late Tom Kingston try secured a hard-fought victory for Michael Foley’s men after they had trailed 17-13 at half-time and 30-27 approaching the final whistle.

The Rebels were the other Aussie side to be celebrating as they claimed their very first win of the campaign and just their fourth success since their inception into the Super XV ranks last season.

The tournament’s newest team opened up a 21-0 lead in an all-Australian affair at AAMI Stadium in Melbourne but injury to Danny Cipriani almost cost the Rebels dear.

Cipriani, who is due to join Sale next season, was instrumental in a stunning start that saw the Rebels score three tries inside 22 minutes. The former Wasps fly-half and Lions hopeful crossed for the third of those scores himself after starting a move from deep within his own half but he limped off moments later after puling a hamstring.

The Force had closed the gap to 24-12 by half-time before edging into a 29-27 lead with 15 minutes remaining as they looked to make it two wins in a row after last week’s narrow triumph against the Waratahs.

But the Rebels somehow stopped a 12-match losing streak after Mark Gerrard made the most of a ruck infringement by Wallaby openside David Pocock to land a late penalty and hand the hosts a win that skipper Gareth Delve believes will give his side ‘an enormous amount of confidence’.