One of the Lions' opponents on the 2013 tour of Australia has just registered a victory that ranks among the biggest in its proud history according a former star. [more] 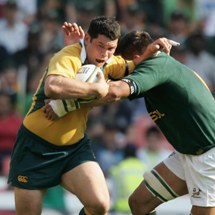 One of the Lions’ opponents on the 2013 tour of Australia has just registered a victory that ranks among the biggest in its proud history according a former star.

The Brumbies, who face Britain and Ireland’s elite in Canberra on Tuesday, June 18 of next year, beat the high-flying Highlanders on Saturday night.

And ex-hooker Jeremy Paul believes that particular success against the previously unbeaten New Zealanders is right up there with the very best for a side that can boast two Super Rugby titles among its list of honours.

"I rate that easily in the top five wins of the Brumbies in the history of the club," said Paul, after the Brumbies won 33-26 in the Australian capital.

"I've been watching the Highlanders play, and I was so proud to be associated with the Brumbies – it was a magnificent win."

The Brumbies suffered a summer of upheaval after a disappointing 13th-place finish in 2011, with the departures of the likes of Rocky Elsom, Adam Ashley-Cooper and Matt Giteau leaving the former heavyweights with a young and inexperienced squad.

New head coach Jake White was then publicly linked with the England job, while unwanted Waratah Ben Mowen was a surprising choice as skipper.

Tipped to finish way down the standings again this term, the Brumbies have confounded the critics by securing three wins from four games to ensure they sit top of the Australian conference.

"To produce your wins on the field with all the hardship the club has had is incredible," added Paul, who won 72 caps for the Wallabies and faced the Lions back in 2001.

"It's the development of the team, brand new captain, only three Wallabies in the squad, all the controversy with Jake White, the new sponsor.

"When you get a young side with a lot of names that you've never heard of, it's so exciting."

White was also understandably impressed by his side’s heroics on home soil, especially as he can see the Brumbies improving week-on-week under his stewardship.

The former South African World Cup winning coach decided not to accept an approach from the RFU to instead concentrate on his four-year contract in Canberra and he will now be hoping the Brumbies build on their early wins over the Highlanders, Force and Cheetahs and a narrow loss at the Chiefs.

“The Highlanders are top of the log and they were unbeaten so obviously it’s one of our best results so far,” said White.

“I don’t want to sound too cliché about it but it really is one game at a time for us. I’m just really proud that whatever we learnt last week we put into practice this week.

“We have exactly the same chances to finish the game out last week and they took those lessons into the game against the Highlanders. That really impressed me.”