Two of the game's biggest names could be about to move to Italy. [more] 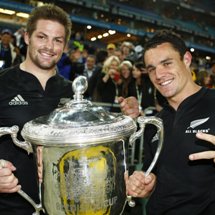 Two of the game’s biggest names could be about to move to Italy.

All Black duo Richie McCaw and Dan Carter are rumoured to be close to agreeing five-month sabbatical contracts with Benetton Treviso.

New Zealand skipper McCaw and star fly-half Carter are contracted with their country’s union until 2015 but both have options to take a sabbatical written into their current deals.

Carter has already tasted European rugby thanks to a short, injury-ravaged spell with Perpignan in 2009 but McCaw hasn’t yet played club rugby outside New Zealand.

The switch would be a major coup for Treviso who only joined the RaboDirect PRO12 ranks last season but have already beaten the likes of Leinster, Munster, Glasgow, Edinburgh, Ulster and the Scarlets since stepping up from the Italian Super 10 competition.

Treviso anticipate that it would cost around one million Euros each to secure the services of McCaw and Carter, although the pair’s management company, the Essentially Group, say they haven’t been contacted by the Italian outfit.

Fellow All Black World Cup winner Jimmy Cowan is another top-notch Kiwi being linked with a move to this part of the world, with Gloucester his apparent destination.

The Cherry and Whites are set to lose first-choice No9 Rory Lawson at the end of the season and head coach Bryan Redpath is apparently in talks with the 30-year-old about a move to Kingsholm next term.

Despite beginning last year’s global gathering as the All Blacks’ starting scrum-half, Cowan wasn’t included in the matchday squad for the final day win over France and has been largely overlooked by the Highlanders so far this season.