England hooker Dylan Hartley has been handed an eight-week ban for biting. [more] 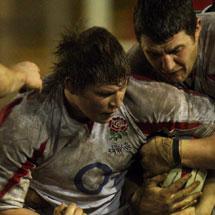 England hooker Dylan Hartley has been handed an eight-week ban for biting.

Hartley was found guilty of biting the finger of Lions flanker Stephen Ferris during England’s 6 Nations clash with Ireland earlier this month.

The Northampton Saints star, who is among the favourites for the No2 shirt when the Lions head Down Under in 2013, committed the offence in the 23rd minute of England’s 30-9 win at Twickenham but received no punishment at the time.

"I am disappointed by the result," said Hartley, who is considering appealing the suspension.

"I will wait for the written judgment as to how the panel came to their conclusion.

"I now have to put it behind me and focus on supporting Saints in training and off the field."

Hartley will miss all but the final club game of the season as his ban runs until May 14, two days after the Aviva Premiership semi-finals.

The New Zealand-born 26-year-old will only represent Northampton again this term if the Saints make it through to the Premiership Final on May 26.

However, he is free to play for England on their summer tour of South Africa after his offence was adjudged to be at the low end of the scale.

The entry point for such an offence is 12 weeks but Hartley saw his ban reduced by four weeks as a result of mitigating circumstances.

No comment has been made on the nature of those circumstances and none is likely to be made before the full written judgment is made public this Friday.