Calum Clark has been banned for 32 weeks for an incident that left Rob Hawkins with a broken elbow. [more] 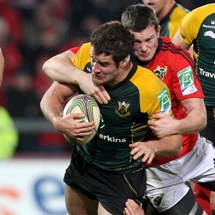 Calum Clark has been banned for 32 weeks for an incident that left Rob Hawkins with a broken elbow.

Clark escaped punishment on the day but was later charged with an act contrary to good sportsmanship by the Rugby Football Union.

The 22-year-old will now be unavailable for selection until November 1, with his ban backdated to start from March 22.

The news is a blow to new England head coach Stuart Lancaster, who had been expected to take Clark with him on the summer tour of South Africa.

Clark had been part of the wider England squad for the recent 6 Nations campaign and had been in line to push for a Test debut against the Springboks this June.

Former Leeds star Clark could yet appeal the verdict, though, with his current club admitting they are frustrated with the length of the sanction.

“The disciplinary panel found that Calum Clark had not intended to injure Rob Hawkins in the course of moving his arm. Accordingly the unfortunate injury suffered by Rob Hawkins was unintentional,” read a statement from Northampton.

“In the light of that finding of the disciplinary panel, Northampton Saints is bound to express concern and disappointment at the imposition of such a long suspension, even after significant mitigation in recognition in what was accepted to be Calum Clark’s genuine remorse.

“Accordingly the club is bound to consider the merits of an appeal.”

Northampton have already lost hooker Dylan Hartley for the rest of the season after the England regular was banned for eight weeks for biting Stephen Ferris’ finger in the 6 Nations clash with Ireland.

Hartley will only be able to play again this term if Saints reach the Aviva Premiership Final on May 26.