Lions tourist Riki Flutey could be on his way to Japan. [more] 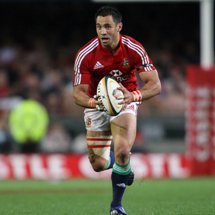 Lions tourist Riki Flutey could be on his way to Japan.

The 2009 Lion has been linked with a move to the Ricoh Black Rams at the end of this season.

Flutey has apparently been in contact with former Wasps chief Leon Holden who is now in charge at the Black Rams about a switch that would see him move closer to his native New Zealand.

"He spoke with Leon last year to see if he would be interested and that contact was followed up," a source supposedly close to Flutey told The Rugby Paper.

"The appeal is obvious – it’s a nine-game season and the money on offer is on a par or above what clubs in France can offer.

"It’s a new lifestyle and culture and would move him nearer to New Zealand."

Flutey only returned to Wasps in the summer of 2010 after an unsuccessful spell with French side Brive brought his first two-year stint with the club to an end.

The 31-year-old has been plagued by injury since earning selection for the Lions tour of South Africa three summers ago and is currently sidelined with a season-ending ankle injury that means he way well have played his last game for the Adams Park outfit.

The former London Irish star made six appearances for Sir Ian McGeechan’s Lions, including a staring role in the third-Test win over in the Springboks in Johannesburg.

Four years prior to that Lions adventure, Flutey played against Britain and Ireland’s elite for Wellington before leaving New Zealand for England later on in 2005.