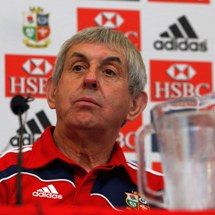 Legendary Lions coach Sir Ian McGeechan is leaving Bath Rugby at the end of the season.

The man who led the Lions on their most recent adventure to South Africa won’t be continuing as director of rugby at the West Country outfit after his contract expires at the end of this season.

McGeechan has been heading up a three-man coaching panel that also features former England lock Martin Haag and Australian Brad Davies but Bath are now looking to employ a new head coach having left that role unfilled since the departure of Steve Meehan last summer.

“Bath Rugby can confirm that Sir Ian McGeechan will be leaving the Club at the end of this season, which coincides with the end of his two-year contract,” read a statement.

“The Club are currently making good progress in identifying a new head coach. The new structure and coaches will be agreed and in place over the summer for the beginning of the new season in September.”

Results this year haven’t been as good as McGeechan would have liked, with Bath currently sitting eighth in the Aviva Premiership and facing a battle to earn an automatic Heineken Cup spot for next term.

A 26-6 home defeat to Northampton last time out comes on the back of a disappointing European campaign and a frustrating LV= Cup semi-final reverse at the hands of bitter rivals Leicester.

But although things on the field haven’t quite gone to plan since McGeechan arrived at The Rec in a consultancy role in 2010, the 1989, 1993, 1997 and 2009 Lions head coach has had a deeper impact on the Club as a whole during their move to an impressive training facility outside of the city in Farleigh Hungerford.

“I’ve really enjoyed being part of Bath Rugby and the challenge of leading the cultural change that has taken place, particularly over the last 18 months,” said McGeechan.

“The commitment of the players and staff during this significant transitional period has been outstanding. I will now take on the responsibility as head coach for the last three games of the season.”