The Wallabies look set to hire at least one coach with substantial inside knowledge of British and Irish rugby ahead of the 2013 Lions tour. [more] 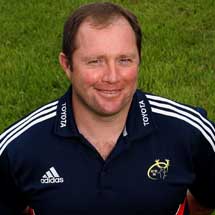 The Wallabies look set to hire at least one coach with substantial inside knowledge of British and Irish rugby ahead of the 2013 Lions tour.

McGahan is expected to be confirmed as coaching director of the Tri Nations Champions but will come in underneath current head coach Robbie Deans.

The Queenslander has worked with a host of Lions tourists, including skipper Paul O’Connell, Ronan O’Gara and Donncha O’Callaghan, during his time at Thomond Park and his understanding of the British and Irish game is likely to prove particularly valuable to the Wallabies.

McGahan has already led Munster to two Celtic League titles in his time as head coach, was part of the backroom staff for the 2006 and 2008 Heineken Cup triumphs and remains in the running for further success in both those competitions this season.

A one-year contract extension at the Irish province was knocked back by McGahan earlier this term but confirmation of his move back to his homeland has been slow coming despite the publication of a substantial review of the 2011 season by Australian Rugby Union directors and former Wallabies Michael Hawker, Brett Robinson, Mark Connors and John Eales.

McGahan might not be the only coach with experience of the game in these isles to be joining the quest to defeat Britain and Ireland’s elite either as former Edinburgh supremo Nick Scrivener is also being linked with a step up to senior international rugby.

A former assistant coach at the Brumbies, Scrivener was named interim Edinburgh coach partway through last season following the dismissal of Rob Moffat.

His reign in the Scottish capital was short lived, however, as he decided to return home to Australia in early summer despite being tipped to take over the Murrayfield-based club on a permanent basis.

Scrivener, who had previously worked as coach of the Scotland A side and whose latest role is that of head coach of the ARU’s National Rugby Academy in New South Wales, is being lined up to become his country’s skills coach, with the Wallabies also looking to appoint a specialist scrum and lineout coach.