Lions team manager Andy Irvine is expecting a huge following when Britain and Ireland's elite head Down Under in 2013. [more] 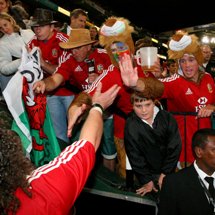 Lions team manager Andy Irvine is expecting a huge following when Britain and Ireland’s elite head Down Under in 2013.

The world’s most-famous touring team took a mammoth support base to South Africa three summers ago and Irvine is predicting an even larger number of fans will make the journey to Australia.

When the Lions took on the Wallabies back in 2001, players on both sides spoke of the ‘Sea of Red’ that accompanied the tourists in Brisbane, Melbourne and Sydney as the world witnessed a truly magnificent series.

The passion of the fans who followed that particular pride provided a lasting legacy that has helped cement the status of a Lions tour among the elite events of the global sporting calendar.

But for Irvine himself, the colour, commitment, camaraderie and sheer numbers of support that picked up the mantle in 2005 and 2009 is in stark contrast to what he experienced as a player.

The former Scotland full back featured across three tours in 1974, 1977 and 1980 when crowds were almost entirely made up of fans from the host country and he admits the prospect of playing and training in front of thousands of followers is something he and his old-school Lions colleagues would have cherished.

“When I first went on a Lions tour in 1974, there were less than 100 supporters who followed the Lions and when I last toured as a player in 1980 there was something in the order of 300,” said Irvine.

“Next year we hope to take as many as 40,000 out to Australia. That’s absolutely fantastic.

“A lot of the supporters that followed us in 2009 started a savings club the first week that they were back home, putting £10 or £15 away each week because they want to be out in Australia with us next year.

“In 1995, when the game went professional, there was a serious doubt as to whether or not the Lions could continue. Would the Lions have access to the players? Was the fixture calendar so congested that tours couldn’t take place? Well, thanks to the foresight of the Lions committee at that time who fought hard to retain the Lions, the Lions brand has gone from strength to strength.

“A Lions tour is now one of the biggest events on the sporting calendar and I’m told that it will actually be the biggest sporting event in the world next summer.”

An incredible number of supporters followed the Lions in South Africa

A massive following isn’t the only thing Irvine is sure of when the Lions set off for the southern hemisphere in the summer of next year, though.

The 60-year-old may be confident that the Lions have what it takes to taste a first series success since 1997 but he is convinced they will face a tougher test than they ever have before in Australia.

The class of 2001 faced a huge challenge in taking on the reigning World Champions but the 2013 Lions face a far more demanding schedule in terms of the opposition they will face away from the Test arena.

Whereas Graham Henry’s Lions scored substantial wins over the likes of Western Australia and a Queensland President’s XV – games in which they tallied a combined total of just shy of 200 points – the next lot of Lions will have no soft matches in which to ease their way into the tour.

After facing the Barbarians in Hong Kong in the tour opener, the Lions are set to play all five Super 15 sides and a combined New South Wales and Country outfit, with Australia head coach Robbie Deans not ruling out allowing his Wallaby stars to feature for their franchises.

And then there’s the mouth-watering three-match series with the Wallabies in late June and early July as the Lions take on arguably the most exhilarating nation in world rugby.

“On the tours I went on, you were always guaranteed three or four Wednesday games where it was going to be 50 or 60 points and it was a wee bit of a breather. Now it’s tough. Every game will be like a Test match.

“The physicality is another thing. The Australians are tough. They’re not dirty, they just love physical confrontation. I’ve heard the game nowadays described as gladiatorial and in some respects it is. If you’ve ever been in a dressing room after an international match, it’s like a war zone, it really is.

“It will clearly be a very tough challenge. In my opinion, Australia have got the best back division in world rugby. They’ve got some fantastic young talent, bags of pace, lots of power and tremendous flair. We’ll be playing on hard grounds and there will be very hostile crowds because the Australian supporters soon let you know that they want their team to win and I admire that about them.

“I might be a little bit biased but I’ve always been a big fan of Australian Rugby. I just love their attitude to the sport. They really have a go, they move the ball and they’ve always been an exciting team to watch. Perhaps it’s because of the conditions they play in, perhaps it’s because traditionally they’ve tended to have more strength in their backs than in their forwards.

“They’ve got some absolutely magical players. They take risks that don’t always come off but it’s exciting to watch. You take a player like Quade Cooper – he can either be up there or down there but, if nothing else, he’s going to be box office to watch. That’s good for the game.

“And we’ve got one or two like that in the mix for the Lions as well. The last thing we want to do is go out there and have a dull, boring series where you just grind away. I thought the rugby in South Africa in 2009 was really special – I thought it was spectacular – and we want to take things on from there.”