England scrum-half Richard Wigglesworth is targeting a place on his country's summer tour to South Africa following his successful comeback from injury. [more] 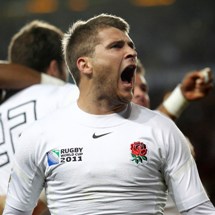 England scrum-half Richard Wigglesworth is targeting a place on his country’s summer tour to South Africa following his successful comeback from injury.

Wigglesworth tore his ACL in his first club game back after starring for England at the 2011 World Cup and was expected to be out of action for the entire season.

But the former Sale Shark beat the odds to feature as a replacement in Sarries’ Aviva Premiership defeat to Harlequins in front of a world-record club crowd last week, just five months after undergoing serious surgery.

And while the 28-year-old’s first priority is to help Saracens surge into the semi-finals of the Heineken Cup with victory over Clermont Auvergne this Sunday, he admits he would love to be involved when England face the Springboks in June.

“Now that I’m back playing, I want to be considered for summer tour if I get enough rugby in between now and then,” said Wigglesworth, who saw Northampton’s Lee Dickson take England’s No9 shirt during the 6 Nations.

“But I’m not expecting to walk back into the team, that’s not the way it works. I want to play as well as I can for Saracens and if they (England) think that’s good enough then I’ll be happy.

“The reality is that you have more of a chance of playing international rugby if you’re playing in big games consistently. We as a club want to do that and I as a player want to be involved in big games as well.

“I have no idea where I stand. I was obviously written off for the season so I was probably wasn’t thought about any point. I’ve not had any communication but I was supposed to be out for the year so I wasn’t expecting any.”

If Wigglesworth does return to the international fold at the end of the domestic season he will be heading back into a squad full of confidence following recent wins over Scotland, Italy, France and Ireland.

In stark contrast to the criticism England faced during and immediately after the World Cup, England are now receiving plenty of plaudits under new head coach Stuart Lancaster

And while Wigglesworth’s injury has meant he hasn’t yet be involved under Lancaster, everything he’s heard from his fellow Sarries Test stars has been positive.

“My only knowledge of what’s gone on is that the players have come back happy,” added Wigglesworth.

“And if players come back happy, you’ve done something right. That’s the battle: getting the players to believe in what you’re doing, to really buy into that. All the players look like they’ve done that.

“There was huge disappointment coming back from the World Cup because we didn’t achieve what we wanted to.

“There was a lot of negative things being written and talked about and we weren’t seen in a good light. Everyone’s happy to have moved on from that.”

As for his injury. Wigglesworth has certainly moved on from that setback far quicker than others expected.

A positive attitude from the very outset has undoubtedly helped his cause, with Wigglesworth admitting he always expected to playing again before the close of the campaign.

“When you miss big games you get very jealous. I’ve tried to stay involved as much as possible and I’ve tried to keep my finger on what the lads are doing, but ultimately you just can’t wait to get back out there.

“I got told I would be out for seven months but my attitude was that they always give you the worst prognosis and not the best.

“I didn’t write the season off. They said to me that the season was gone but my nature is to immediately question why.

“I got a call from (Lions prop) Tim Payne who’d come back from an ACL injury in four months. He rang me and said, ‘Why are they saying you’re out for the season?’

“Everyone always tells you about the ones that take a long time but he was good enough to give me a ring and tell me his experience, with the same surgeon and same operation. Tim came back in four months and I’ve taken five so I think I’ve taken a long time, not a short time.

“I didn’t have much swelling and I started my rehab four or five days after I’d had my operation so I was lucky like that. I’ve effectively had a pre-season for the last two months. As soon as I could run, I basically started being flogged back to fitness! I’ll be as fit as I have been after any pre-season so I’m ready to go.”