James Haskell's hopes of becoming a Lion next year could well be enhanced by his current stint in the southern hemisphere. [more] 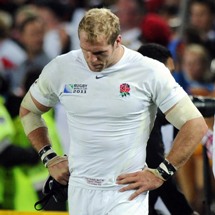 James Haskell’s hopes of becoming a Lion next year could well be enhanced by his current stint in the southern hemisphere.

The England back rower has been calling Dunedin in New Zealand home in recent months, having also played a full – if somewhat short – season in Japan playing for the Tokyo-based Ricoh Black Rams in the Top League.

Haskell is loving life in the Super 15 for the inform Highlanders and has quickly become a fans’ favourite thanks to his commitment to the cause and eagerness to learn.

And while England’s impressive 6 Nations showing means he will have to work hard to win back his international place when he returns to London Wasps next season, Haskell is undoubtedly in with a shot of representing Britain and Ireland’s elite in Australia in 2013, especially as he feels his journey outside of his comfort zone has made him a better player.

"I wanted to play Super 15. I wanted to develop some maturity, some leadership and to work on my skill set," Haskell, who also spent two years in the Top 14 with Stade Francais, told the Guardian.

"Also, I want to have played all round the world. Then you can come to informed opinions. People make very many comments in life when they don't have the background or the knowledge. I'll be able to tell you what it's like in four of the big leagues in the rugby world.

"It takes a lot of sacrifices to come over here. You're leaving your friends and family to go to a place where you don't know anyone. Financially, over here it's a very different ball game. The money just isn't competitive, so you have to make it a purely rugby decision. And you've got to give up your England place.

"But I've had a great experience. I've played with some of the best players in the world, and I've loved every minute of it."

Haskell’s experiences in New Zealand certainly make for interesting reading. Not only do they show some significant cultural differences between the northern and southern hemispheres, they also give us an insight into how the All Blacks, Springboks and the Wallabies prepare to face sides like the Lions.

"It's interesting – you ask people in England what they think of Super 15 and they'll have a lot more comments than the other way round," added Haskell.

"That's what I've always found with Australia, South Africa and New Zealand – they just focus on what they're doing, whereas in the UK we look outwards more.

"Talking to the guys who are All Blacks, when they're preparing for an international they do some analysis on patterns of play, but they don't focus on the minutiae of their opponents.

"Some players might disagree, but I reckon if you asked an All Black after a game who his opposite number was, most of the time he wouldn't know, unless it was someone like Jonny Wilkinson."