Scotland scrum-half Mike Blair could be on his way to France next season. [more] 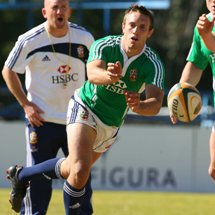 Scotland scrum-half Mike Blair could be on his way to France next season.

Blair has reportedly held talks with Perpignan president Paul Goze about a move to the Stade Aime Giral as the Catalan outfit continue their search for a new No9.

The ex-Scotland skipper, who turns 31 later this month, has only ever played professional rugby for his country’s capital city outfit but the chance to finish his career in the Top 14 may be too good to turn down, especially with the comparatively high wages in the French domestic game.

Blair starred in Edinburgh’s stunning Heineken Cup success over four-times European Champions Toulouse at Murrayfield on Saturday, scoring his side’s first try in the 19-14 triumph at Murrayfield but Michalel Bradley’s men are already out of the running for the RaboDirect PRO12 play-offs.

He is one of four foreign scrum-halves being closely monitored by Perpignan, with South African Dewalt Duvenage and Australians Josh Valentine and Ben Lucas also on Goze’s radar.

Dewalt has been in fine form for Super 15 leaders the Stormers so far this term but is under contract until the autumn, while Lucas plys his trade with the Queensland Reds and Valentine is already in France with Narbonne.

If Blair does decide to swap Scotland for France, he would join up with fellow Lion James Hook in Perpignan.

Hook, who like Blair represented Britain and Ireland’s elite three years ago but missed out on a Test cap against the Springboks, was at his brilliant best in his new side’s 47-9 thrashing of Bayonne the week before last.

The ex-Osprey scored 25 points and kicked eight from eight before being replaced to a standing ovation with 10 minutes left to play. He was subsequently named in Midi Olympique’s Top 14 team of the week as he continues to endear himself to the Perpignan faithful.

Potential Lions lock Luke Charteris is almost certainly heading to Perpignan next season, while Gloucester No8 Luke Narraway has also signed for the club.

Perpignan will also have a new head coach next term, with Marc Delpoux leaving Bordeaux Begles to take over from Christophe Manas who was appointed after the sacking of Jacques Delmas earlier this season.