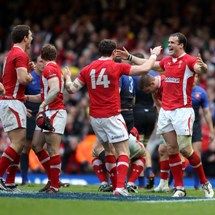 Jones, who was one of the heroes of the victorious 1989 Lions tour to Australia, believes the money on offer in the Top 14 makes it very difficult for Welsh players to turn down a move overseas.

Cuthbert is being heavily linked with a summer switch to either Racing Metro or Toulon.

The 22-year-old has reportedly met with representatives of those clubs, with the Blues admitting that, although they have made him a six-figure offer, foreign sides have also proposed deals that could see him leave Wales.

"It's obviously going to be down to money," Jones told the BBC.

"At the moment he's still on a small development contract with the Cardiff Blues [and] he's been in negotiations.

"Certainly whatever contract he will be offered, even as a top-class international player, it won't come anywhere near the type of figures that the French clubs will be offering.

"I don't think anyone can blame him or any other player for leaving."

Cuthbert has enjoyed a remarkable rise from the Blues development squad to the senior Wales side this season.

He was a key member of his country’s 6 Nations party and scored a crucial try in the Grand Slam clinching win over France in mid-March.

The Gloucester-born wing is currently on less than £20,000 a year, with his Blues development deal supplemented by a Wales Sevens contract.

If he does decide to head across the Channel for what would undoubtedly be a massive pay rise, Cuthbert would join the likes of Welsh Lions, Lee Byrne, James Hook and Mike Phillips at French clubs.

Fellow internationals Gethin Jenkins, Aled Brew, Luke Charteris and Huw Bennett have all reportedly signed for French teams ahead of next term, while Dan Biggar is another big name apparently keen on a move to Racing Metro.