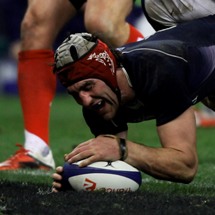 The Lions head Down Under in 2013 but Scotland and Wales both take on Australia in two months’ time.

Their respective Tests with the Tri Nations Champions provide a perfect platform for Lions contenders to push their selection claims but Brown won’t be among them.

The Saracens flanker hasn’t played since before the 6 Nations and he has now admitted that he doesn’t expect to be back in action until the start of next season.

“I phoned and spoke with Andy (Robinson) last week and said it’s going to be too soon (to tour),” Brown told The Scotsman.

“It’s a shame because I’m desperate to get back – I absolutely love playing for Scotland and it feels like I have not done that for a really long time.

“Having said that, I am using the time off well. I’m working hard and I’m determined to come back even stronger and fitter.

“I’m not going to put a date on it but I would hope to be back by the start of next season.”

Brown had been due to be named Scotland skipper for the ultimately unsuccessful 6 Nations campaign but a broken fibula prevented him from accepting that honour.

The 29-year-old suffered the setback in Sarries’ Heineken Cup win over Treviso in January and is currently stepping up his rehab following successful surgery.

Scotland take on Australia on June 5, before also playing Test matches against Fiji and Samoa.