Reds boss Ewen McKenzie says he isn't eyeing up the Australia job despite a change in his role next season. [more] 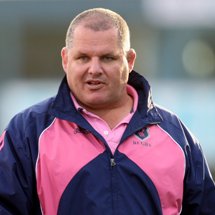 Reds boss Ewen McKenzie says he isn’t eyeing up the Australia job despite a change in his role next season.

McKenzie will be moving to a director of coaching post in 2013 after the reigning Super 15 Champions announced that Richard Graham will be leaving the Force to become head coach in Queensland next season.

Former Waratahs chief McKenzie was heavily tipped to take over from current Wallaby coach Robbie Deans when the New Zealander’s contract ran out recently but the Australian Rugby Union stuck with Deans and McKenzie signed a new deal with the Reds.

But with McKenzie set to become even further removed from the day-to-day coaching of the Reds when he steps up to director of rugby in 2014, there is speculation that he will lead the Wallabies when Deans’ new deal runs out the year after the Lions head Down Under.

"I've had no discussions with the ARU about anything," said McKenzie at a Reds press conference.

"I don't have any thoughts exterior to what's going on at Queensland Rugby.I announced back in late January about signing for a couple of years. That's still the case.

"You can speculate all you like about that and the motivations and whatever, but in the end we're trying to put in the best model for Queensland rugby…and make sure we have future success.

"I'm interested in growing my skill set and growing new skills on the executive level.

"We've got a chance to look at the coaching group and how we move forward. Tell me where another Super Rugby team in Australia has had the opportunity to do that. I think we've been pretty forward thinking."