Wallaby legend Michael Lynagh is in hospital with an unconfirmed illness. [more] 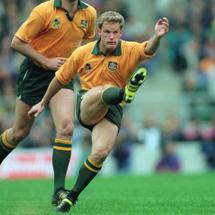 Wallaby legend Michael Lynagh is in hospital with an unconfirmed illness.

The Royal Brisbane and Women's Hospital have confirmed to the broadcaster ABC that the 1991 World Cup winning fly-half has been admitted for treatment, although no official news on his exact condition has yet been released.

Lynagh was initially reported to have suffered a stroke but more up to date information suggests he is suffering from blood clots on the brain.

This is yet to be confirmed, however, with his family requesting that no further details on his condition be made public.

The 48-year-old is thought to have complained of dizziness while at dinner with friends having flown to Brisbane from London at the weekend.

Lynagh is currently working as a TV analyst with Sky Sports, a role he has held for several years.

He won 72 caps for his country in a glittering playing career that included three appearances against the 1989 Lions and a World Cup Final victory over England at Twickenham 21 years ago.

He represented the Wallabies from 1984 to 1995, captained the side during the final two years of his international career and set the world record for international points scored before joining Saracens in 1996.