Wales coach Warren Gatland is backing Rob Howley as the perfect stand-in for this summer's tour of Australia. [more] 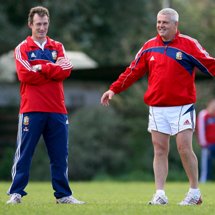 Wales coach Warren Gatland is backing Rob Howley as the perfect stand-in for this summer’s tour of Australia.

Gatland will miss the three-Test series with the Wallabies and the earlier encounter with the Barbarians after fracturing both heels in a fall at his home in New Zealand but he is convinced assistant boss Howley will do Wales proud Down Under.

"Although I am devastated to be away from the action I am delighted that we have someone of Rob's calibre to take charge in my absence," said Gatland, who appointed Howley to his coaching staff back in January 2008.

"During my time in Wales we've put in some young coaches who have developed significantly over the past few years and I believe they are capable of stepping up to the job.

"As coaches we debate selections and strategies vigorously and we don't always agree, but once a decision is made we all support it totally. I know the Welsh people won't always agree with some of those selection decisions and they have a right to their views, but I would ask them to offer the same kind of support to the coaches once those decisions have been made.

"I know Rob will be his own man as caretaker coach, but he and I share a similar vision about the international game so the players and coaches will know what is expected of them."

Gatland had hoped to be able to continuing coaching Wales this summer despite the serious nature of his injuries but medical advice has made it clear that he needs more time to recover than he had initially thought.

Having led Wales to a second Grand Slam in five seasons since taking charge, Gatland was looking to test his troops against the Lions’ next opponents just a year before Britain and Ireland’s elite make the same journey south.

But now he will have to wait until the autumn to take on the Wallabies when they step up their preparations for the Lions with a trip to the Millennium Stadium on December 1.

"I have talked through all the potential scenarios with Rob and (WRU chief executive) Roger Lewis, but the medical advice is clear and cannot be ignored," added Gatland.

"I will not be ready to take charge of Wales for the international against the Barbarians and if I recover enough to get to Australia during June I am still unlikely to be mobile enough to play a full coaching role.

"It has been difficult to accept that advice, but it just makes me more determined than ever to get back into the driving seat with Wales later on this summer as we prepare for an autumn series which includes games against New Zealand and Australia."