Australia star Will Genia has performed a dramatic U-turn to re-sign with Queensland Reds. [more] 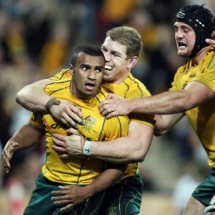 Australia star Will Genia has performed a dramatic U-turn to re-sign with Queensland Reds.

Just two days ago the Reds announced the scrum-half would quit the club to join Perth-based franchise Western Force.

But Genia, arguably the best scrum-half in the world, has pledged his future to the Reds with a new contract that runs until the end of 2015.

The 33-cap Wallaby turned down the lure of big-money moves abroad is now in line to face the Lions during the 2013 tour of Australia.

"I always maintained a strong desire to stay in Queensland with the Reds, however I also received offers both in Australia and from overseas and considered my options," said Genia.

"(Coach) Ewen McKenzie asked me on Friday whether I was going to be staying with the Reds and I told him I was going to join the Western Force at the end of the season.

"But, when I considered my options over the weekend, I realised it didn't really sit well with me and my heart was in Queensland and that's where I want to play my rugby."

McKenzie was also delighted to retain the 24-year-old's services.

"It was disappointing to come to terms with Will leaving us and possibly playing against the Reds in 2013 however, we're pleased he's decided to choose what's best for his rugby future by staying in Queensland," added the head coach.