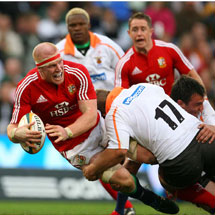 The man who led the Lions on their 2009 adventure to South Africa may have played his last game of the season due to injury.

O’Connell twisted his knee in the 55th minute of Munster’s win over Ulster last weekend, with a club press release stating that he is ‘unlikely to feature’ in Saturday’s RaboDirect Pro12 play-off against the Ospreys.

Fears are growing that the inspirational second row won’t be available for his province even if they make the Grand Final in two-and-a-half weeks’ time when they would play either Leinster or Glasgow Warriors.

Ireland take on the Barbarians at Kingsholm on May 29 before facing a three-Test series against the World Champions on June 9, 16 and 23.

O’Connell’s potential absence is a huge blow to Ireland head coach Declan Kidney as his side look to bounce back from a disappointing RBS 6 Nations campaign. Ireland only beat Italy and Scotland in this year’s tournament and were trounced by England in their final game of the competition.

The 32-year-old did an outstanding job leading the Lions three years ago but competition for the second row spots is even tougher this time around with the likes of Richie Gray, Courtney Lawes, Luke Charteris, Alun Wyn Jones and Ian Evans all having shone over the past eight months.