Wycliff Palu has taken a huge step towards facing the Lions by agreeing to remain in Australia until the end of the 2013 season. [more] 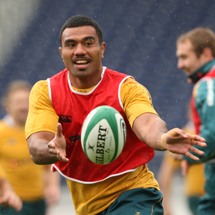 Wycliff Palu has taken a huge step towards facing the Lions by agreeing to remain in Australia until the end of the 2013 season.

Waratahs No8 Palu had been heavily linked with a move overseas but has instead decided to pledge his immediate future to the Sydney-based franchise.

Palu currently has 38 Test caps to his name and is among the favourites to pack down at the back of the Wallaby scrum when the Lions head Down Under in less than 13 months’ time.

The 29-year-old is returning to his best-form after an injury-ravaged two seasons but a potential move to Japan would have ruled him out of the three-Test series with Britain and Ireland’s elite.

"I feel that I'm slowly getting back to where I want to be," said Palu, who made his Wallaby debut in 2006.

"I feel that in another six months playing here, and another full pre-season next year, I'll definitely be a lot better than I am now.

"Going to Japan, it's just a bit hard. You don't know what their medical staff is like. I feel like what I am doing here is working. Hopefully this time next year I am a better player, in better shape."

Palu has impressed in a frustrating Super 15 campaign for the Waratahs this term and is expected to feature heavily in his country’s summer series against Wales next month.

Australia take on Scotland on June 5 before facing the Grand Slam winners in Brisbane, Melbourne and Sydney on June 9, 16 and 23.