Michael Cheika could lead a side against the Lions after it became clear that he won't be staying on as head coach of Stade Francais next season. [more] 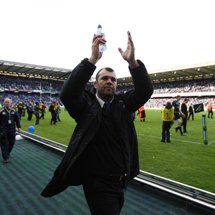 Michael Cheika could lead a side against the Lions after it became clear that he won’t be staying on as head coach of Stade Francais next season.

The Australian has been in charge of the Parisians giants since the start of the 2010/11 campaign but has not been offered an extension to his two-year contract.

Stade have failed to qualify for the Heineken Cup and the Top 14 play-offs for the third season running and the second under Cheika’s stewardship meaning his removal hasn’t come as a complete surprise.

And although it hasn’t yet been announced whether Cheika will stay on in another capacity in the French capital, he is already being heavily linked with a return home to Oz.

Richard Graham’s defection from the Force to the Reds has left a vacancy at the Perth-based outfit for next term and Cheika’s experience means he is among the leading candidates.

Cheika and former Munster coach Tony McGahan were the early favourites for the Force post when Graham stood down last month but McGahan chose to join Robbie Deans’ national set up instead.

Sir Ian McGeechan’s departure from Bath saw Cheika linked with a move to The Rec but it now seems more and more likely that he could be in charge of the Force when they take on the Lions on Wednesday June 5, 2013.

The 45-year-old led Leinster to their first Heineken Cup crown in 2009 and is widely credited for starting the process that has seen the Dubliners establish themselves as the leading side in Europe.

Cheika has coached in his homeland before but only at club level rather than in Super Rugby. He guided Randwick to Premiership glory in 2003/04 having started his coaching career at Italian outfit Padova.

A former Australian U21 international back rower, Cheika never quite made the grade for the Wallabies but he did captain Sydney club giants Randwick between 1997 and 1999.