Wales have selected four uncapped players and nine Lions in a 38-man training squad ahead of the tour of Australia. [more] 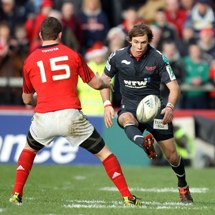 Wales have selected four uncapped players and nine Lions in a 38-man training squad ahead of the tour of Australia.

Scarlets full back Liam Williams and prop Rhodri Jones, Blues wing Harry Robinson and Ospreys centre Ashley Beck could all make their first international appearances in the Cardiff clash with the Barbarians, while triple Lions tourist Martyn Williams is in line to win his 100th Welsh cap in that fixture.

Wales have stuck with the majority of their Grand Slam winning squad but have also called up fly-half Dan Biggar, centre Andrew Bishop, flanker Josh Turnbull and wings Aled Brew and Will Harries as well as openside Williams who looked set to be stranded on 99 appearances after missing out in the RBS 6 Nations.

Caretaker coach Rob Howley, who is standing in for Warren Gatland after the Kiwi injured his heels in a fall from a ladder last month, will confirm his final party for the three-Test series against the Wallabies after the Millennium Stadium encounter with the Babaas on June 2.

Skipper Sam Warburton has been selected despite his struggles with a shoulder injury that has seen him sidelined since the win over France in March, while 2009 Lions Mike Phillips and James Hook have also been named after Bayonne and Perpignan failed to qualify for the Top 14 play-offs.

Fellow French-based Lion Lee Byrne is only on standby for the tour, however, due to the fact that his Clermont Auvergne side are still in the running for the Top 14 title having finished second in the regular league season.

Jamie Roberts, the HSBC Man of the Series when Britain and Ireland’s elite travelled to South Africa three years ago, is unavailable because of a knee injury and hooker Huw Bennett won’t feature as a result of an Achilles problem.

“We have been pretty consistent with selection, it’s now down to these players to pick up where we left off in the 6 nations and prove to us that they should be on that plane to Australia,” said Howley, who will bring his squad together for the first time on May 21, although the Ospreys contingent won’t be in camp until a week later due to their PRO12 Grand Final trip to Leinster.

“We hope to get the summer off to a winning start against the Baa-Baas and everyone who figures in that game will be playing for a place on the tour.

“Both Mike (Phillips) and James (Hook) will be with us from the start, Sam (Warburton) is still on track and we are optimistic that both Jonathan Davies and Scott Williams will have reached full fitness and be able to play their part in the tour.

“We have a tough series ahead of us with five matches in four weeks and two games in two separate hemispheres in the space of seven days, but we are fully focussed on the prize of that elusive Southern Hemisphere scalp.”

As well as facing Lions’ opponents the Wallabies in Brisbane, Melbourne and Sydney on June 9, 16 and 23 respectively, Wales have today added an extra fixture to their calendar by agreeing to take on the Brumbies in Canberra on June 12.