Tim Visser says he feels at home in Scotland after being named in their summer tour party. [more] 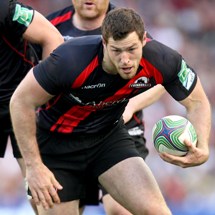 Tim Visser says he feels at home in Scotland after being named in their summer tour party.

Visser has been selected by Andy Robinson for the trip to Australia, Fiji and Samoa as he prepares to qualify on residency grounds.

The Dutch born and raised wing is ineligible for the June 5 clash with Lions’ opponents the Wallabies but will have passed the three-year residency rule before the game with Fiji 11 days later.

“I would love to represent Scotland,” said Visser, who was named the PRO12 Players’ Player of the Year earlier his month.

“Having lived here for such a long time now, I've got to know the country and the people very well and I feel very much part of the country.

“I feel really at home here and the people have been great.”

Visser has enjoyed a remarkable rise since Robinson brought him to Edinburgh from Newcastle Falcons back in 2009.

The 24-year-old, 6ft 4in flyer has been named in three successive Celtic League dream teams and has finished as the tournament’s top try scorer in each of those years.

Visser has scored 37 tries in his 57 league games for the Scottish-capital outfit and a similarly strong start to his Scotland career could see him become a real contender for the 2013 Lions tour of Australia.

A trio of other Lions hopefuls are missing from the Scotland squad, however, with back rowers Kelly Brown and Dave Denton both injured and lock Jim Hamilton suspended after striking David Paice in Gloucester’s Premiership defeat to London Irish.

Veteran prop Allan Jacobsen is rested, while Rory Lamont and Lee Jones are other front-line players out injured.

Robinson has named four other uncapped players alongside Visser in a 28-man party, withGlasgow Warriors forwards Ryan Grant, Rob Harley and Tom Ryder and Edinburgh back Tom Brown looking for their first opportunity at Test level.

"One quarter of the squad has yet to start an international, but we've seen from the manner in which Edinburgh and Glasgow have finished the domestic season that there's confidence that we will be looking to build on," said Robinson, whose side finished with the Wooden Spoon in this year’s RBS 6 Nations.

"This is a tough tour for Scotland. We'll be playing against three attack-minded teams on their own turf, but it's an important opportunity to start the rebuilding process after a disappointing 6 Nations."

Former Wales and Ospreys boss and new Scotland assistant Scott Johnson will join Robinson Down Under but Queensland Reds defence coach Matt Taylor, who will be part of the Scotland set up after the Super 15 season ends, won’t be involved with the touring group.