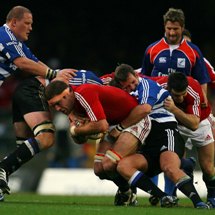 The 2009 Test Lion has agreed to join the staff at French outfit Bordeaux-Begles.

Worsely, who retired from the playing side of the sport in November due to a neck injury, will link up with former London Wasps colleague Rafael Ibanez after the ex-France hooker became general manager at the Top 14 team.

"Joe is someone who is hugely competent," said Ibanez, whose advice led to president Laurent Marti appointing the 34-year-old as defence coach.

"I played with him for five years at Wasps and could see his qualities as a defender and the ideas he had concerning that sector of the game."

Worsely enjoyed a stellar career with Wasps, England and the Lions, winning 78 caps for his country and picking up a World Cup winners’ medal in 2003.

He tasted Heineken Cup, English Premiership and Anglo-Welsh Cup glory with Wasps and was a popular tourist when Britain and Ireland’s elite headed to South Africa three years ago.

Worsely made six appearances for the Lions and started the comprehensive third-Test victory over the Springboks in Johannesburg.