McGahan hopes to give Oz the edge 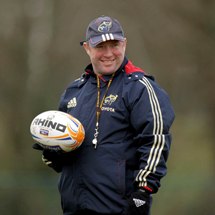 McGahan has linked up with the Wallabies, ahead of the 2013 Lions tour, as a coaching co-ordinator.

He left two-time European kings Munster at the end of the season and has joined Andrew Blades and Nick Scrivener in Robbie Deans' back room staff.

Now he hopes to pass on his wealth of experience in the European game, where he has coached the likes of former Lions captain Paul O'Connell, to toughen up the Wallabies.

"That cut throat mentality and mindset that's certainly prevalent in European rugby will mean I can hopefully add value and bring some of those elements back to the Wallabies," said McGahan.

Australia face Scotland and Wales this June, as they begin their build-up to the Tri-Nations and next year's Lions tour.

McGahan, who will be in charge of the Wallabies defence, forged his early reputation with the Australia under-19s.

And he is relishing the opportunity to catch up with the likes of Rocky Elsom, David Pocock and Digby Ioane as Australia bid to build on their third-place finish at last year's World Cup.

"We haven't really seen each other for a long period of time… they've certainly changed and grown into very influential international players, not only Wallabies," added McGahan.

"And I've certainly changed a lot too, so it'll be interesting. But having a history with players makes the introduction back into any environment a little bit easier."