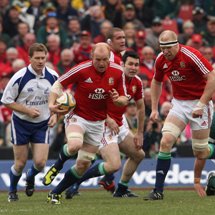 Warburton was developed as an understudy to Williams at Cardiff Blues before over-taking the old master to establish himself as one of the world's most formidable flankers.

But with Warburton set to lead an advanced party to Australia ahead of the June 2, clash with the Barbarians, Williams is set to enjoy a Millennium Stadium farewell.

"It's brilliant for him," said Warburton. "He does really deserve that 100th cap and it would have haunted him for the rest of his life if he hadn't.

"He might not admit that, but I think he'd desperately want it. So I'm really chuffed for him that he's got that coming."

Warburton was disappointed with the crowd at Williams' final regional match last month. Less than 4,000 turned out at the Cardiff City Stadium as the Blues raced to a 38-13 victory over Edinburgh.

But the Grand Slam captain has urged Wales fans to turn out in force to give the veteran flanker "his just reward".

"I was disappointed, to be honest, with the last game at the Blues when there was only about 3,000 there," added Warburton. "For a player like Martyn, you think he deserves a better send-off."

Williams' Test career will come full circle if he faces the Barbarians in two weeks time, having made his Wales debut against the famous invitational club in 1996.

The man known as 'Nugget' went on to feature in three consecutive Lions tours, including all three Test matches in South Africa.

Warburton is expected to follow in Williams' footsteps by earning selection for the Lions and has even been tipped to captain the famous tourists during next year's series in Australia.