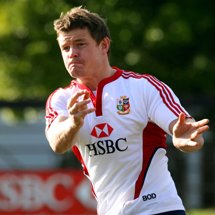 Lions legend Brian O’Driscoll has returned to captain an Ireland squad that features three uncapped players for their summer tour of New Zealand.

The triple Lions tourist has been in superb form for Leinster since returning from a neck and shoulder injury last month and played a pivotal role in their Heineken Cup Final triumph over Ulster on Saturday.

O’Driscoll missed the entire RBS 6 Nations campaign and hasn’t been involved with his country since the World Cup quarter-final defeat to Wales back in October.

Critics had suggested the 34-year-old would slump into retirement but O’Driscoll has come back strongly and now has the perfect chance to push for a place on a fourth successive Lions tour.

Fitzpatrick has been playing second fiddle to Tom Court and John Afoa in the prop department at Ulster but injury to the former in Saturday’s European showpiece means the 28-year-old has jumped up the Ireland pecking order and could win his first cap against the All Blacks.

Sherry has been included alongside Rory Best and Sean Cronin at hooker, while Zebo’s try-scoring form for his province and for Ireland A means he will challenge the likes of Andrew Trimble, Keith Earls and Fergus McFadden for a wing spot in the absence of Tommy Bowe.

Paul O’Connell remains an injury doubt, however, with head coach Declan Kidney keeping four spots open due to concerns over the fitness of the 2009 Lions captain and a trio of other potential tourists.

O’Connell suffered a knee injury in Munster’s domestic derby with Ulster on May 5 and was ruled out of action for between four and six weeks. The giant second row faces a race against time to be fit for the first Test with the World Champions on June 9 but Kidney is hopeful his talisman will be able to tour.

Leinster scrum-half Isaac Boss is struggling with a thigh problem that saw him ruled out of the Heineken Cup Final at the last minute, while Chris Henry is being assessed to see how he comes the aftermath of Saturday’s final having previously been struggling with an ankle injury.

Connacht prop Wilkinson, who is in line to fill Court’s shoes in New Zealand, has been out of action since mid-April after a calf injury in the Rabo Direct PRO12 win over Ulster in Galway, leaving Kidney to add four AN Other’s to his squad list.