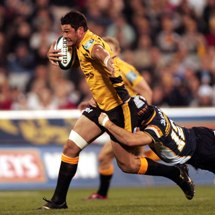 Shepherd has won nine caps for the Wallabies and is the Force’s leading scorer in the history of the southern hemisphere’s premier club competition.

He hasn’t featured for his country in recent times having seen a number of injury setbacks disrupt his career but, at just 28 years old, a strong campaign next year could have seen him push for a squad place in the three-Test series with Britain and Ireland’s elite.

At the very least the English-born goal kicker would have featured for the Force in the Lions’ opening fixture Down Under but he has instead opted for a fresh challenge overseas.

“It was a tough decision, but it’s a great opportunity to try something new,” said Shepherd, who has been restricted to just two games this season.

“Every time I’ve come off contract with the Australian Rugby Union I’ve had opportunities to head overseas, but this is the first time I’ve seriously considered it.

"I've heard lots of good things about Jim Mallinder as a coach and about the Saints as a club. Jim has got the team playing a great brand of rugby which I believe suits my style of play and to which I think I've got a lot to offer.

"It’s definitely going to be a new challenge for me. The Premiership is a tough competition and there are a lot of teams which like to play exciting rugby, especially the Saints. You can see that with the quality of player that there is at the club, players like Ben Foden and George Pisi, who are established internationals.

Shepherd could yet join up his new side earlier than the end of the Super 15 campaign as the Force look set to release him from his contract this weekend.

A wrist injury has already ended his Australian season prematurely so Shepherd could be free to join up with his Saints team-mates sooner rather than later.

"Cameron is a very talented player who has shown regularly that he has the ability and temperament to compete at the highest level," said Mallinder, who is losing England wing Chris Ashton to Saracens this summer.

"He has a positive impact for his team's attacking capability but is also sold defensively and under the high ball.

"He will also give us another goal kicking option, and his versatility and quality will give us added depth in the back three positions."