Phil Dowson will captain England against the Barbarians on Sunday. [more] 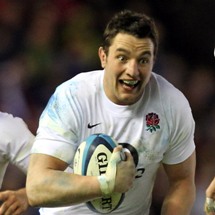 Phil Dowson will captain England against the Barbarians on Sunday.

The Northampton back rower takes over from Chris Robsahw who is in Aviva Premiership Final action for Harlequins on Saturday.

Dowson has been chosen by head coach Stuart Lancaster ahead of Northampton team-mate Dylan Hartley who is available to face the Babaas after the end of his eight-week suspension for biting.

Former Newcastle star Dowson started the RBS 6 Nations campaign against Scotland but was later dropped to the bench in favour of the Scarlets’ Gloucester-bound No8 Ben Morgan who is currently recovering from a hamstring problem.

But the manner in which he dealt with that disappointment impressed the England coaching staff, particularly forwards coach and 2009 Lions assistant Graham Rowntree.

“There are a few guys we could give the captaincy to but we feel Dows is right for this game,” said Rowntree ahead of the non-cap international at Twickenham.

“'Phil is one of the key members of out leadership group. He coped with the disappointment (of losing his place in the team) very well. That is the mark of Phil Dowson.

“He took it on the chin and we all saw the rise of Ben Morgan towards the end of the 6 Nations so it wasn't easy for him. But he never stopped giving his experience to the younger guys and giving to the group. He is a great leader.

“When he makes a point it is worthwhile. When you are pulling guys together for the first time, that leadership is important. He will make sure we are right on it.

“This is a proper game, as intense and as big a game as a Six Nations game for us.”

England will name their side for Sunday later in the week but, with players from Quins and Leicester not available for selection, a number of new faces could feature prior to the five-match tour of South Africa.