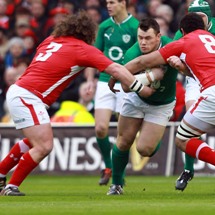 Jones starred for the Lions on the 2009 tour of South Africa and is among the favourites to be named as the first-choice tight head for the three-Test series in Australia next summer.

The veteran Osprey packs down alongside Gethin Jenkins in the Wales front row – the man with whom he propped up the Lions scrum for parts of the series with the Springboks three years ago – but he says it is Healy who can claim to be the front runner for a place in the side to face the Wallabies in just over 12 months’ time.

"Gethin Jenkins won't like me saying this but Healy is probably the in-form loose head prop in British and Irish rugby right now, and perhaps in Europe," said Jones as the Ospreys prepare to take on Healy’s Leinster in the PRO12 Final.

"There were questions marks over his scrummaging a couple of years ago but that's something almost every prop has to go through.

"When you start at such a young age, you have to learn on the hoof but he has worked hard on that area and is a destructive player.

"He's also a real athlete and carries the ball as much as any of the Leinster forwards. The less he is carrying the ball, the better for us."

Leinster go into Sunday’s domestic decider on the back of a crushing Heineken Cup Final win over Ulster at Twickenham.

Brian O’Driscoll and co scored a record-breaking 42-14 success over their Irish rivals as they picked up a third Heineken Cup crown in four seasons.

Jones is fully aware of the challenge that lies ahead in Dublin but he insists the Ospreys’ recent record against the European kings – a Celtic League Grand Final success at the RDS two years ago and home away wins against them so far this season – means they remain quietly confident of causing an upset.

"For any team to win three titles in four years is something special," added Jones.

"I've watched documentaries about American Football teams who become a dynasty by winning things over and over and I guess that's what Leinster have done. Their success is something we are striving for.

"They were excellent last week at Twickenham. It's very hard to pick any obvious weaknesses in their team, especially when playing in Dublin, so we know how hard it is going to be.

"Leinster have strength in every area but we have beaten them twice this season so we know we can match them. It's just like when Wales play Ireland, they're always close matches."