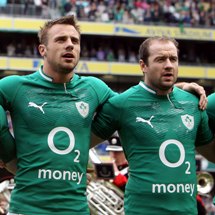 Leicester full back Murphy called time on his Ireland career yesterday after 72 caps and more than a decade of service to his country.

The 34-year-old became the most dropped player in his country’s history yet he will also be remembered as one of the game’s greatest natural talents.

And now Bowe, who played alongside him for Ireland but became a Lion four years later than Murphy, has spoken of his true class, both on and off the field.

"I think Geordie will have more people than anyone wanting to give their great memories of him," Bowe told the Irish Times.

"He is as skilful as they come on a rugby pitch. You see him playing week in, week out for Leicester Tigers and they have won everything there is to win.

"He has had some moments of brilliance for Ireland and, even though things maybe haven't gone his way, off the pitch he is an absolute legend of a man.

"I admired him big time before becoming an Ireland player. Back in my days whenever I wasn't getting on the team and the coaches were maybe down on me a little bit, he was one of the first people to tell me to keep my head up.

"He was really influential on me like that, he was a character around the squad for having the craic but also for having a word with someone that maybe is a little down, for putting an arm around him."

Murphy will be hoping to end his domestic season on a high by leading Leicester to Aviva Premiership glory against Harlequins at Twickenham on Saturday but injury has ruled Bowe out of the Ospreys’ RaboDirect PRO12 Grand Final with Leinster at the RDS.